A286 screws, also known as Alloy 660 screws are stainless steel alloy which contains iron, nickel and chromium. A286 vented screws are known for their high strength, creep resistance and oxidation resistance at elevated temperatures once age hardened.  As a result, A286 screws provide high levels of strength from room temperature up to about 1300°F (700°C).

A286 vented screws are also mildly corrosion resistant. While they should not be used for strong acid environments, they provide excellent oxidation resistance up to 1500°F (815°C) in conditions that would typically be found in high temperature exhaust streams.

Because of the properties of Alloy 660 / A286, these vented screws are often found in high temperature engine, manifold, exhaust and turbine applications as well as off-shore oil & gas applications. In addition, A286 / Alloy 660 is also non-magnetic and finds a niche in non-magnetic cryogenic equipment.

A286 vented screws are ideal for use in high vacuum (UV) and ultra high vacuum (UHV) equipment, as well as other high pressure environments and applications where gas pockets can form. Center vented screws have a center bore drilled through their axis from the head through the threaded shank of the screw. This feature provides an outlet for the complete evacuation of trapped air and gas contaminants to be pumped away from blind-tapped screw holes, bottoms, sides and shoulders. In addition to vented screws, washers with vent grooves can be made to ensure the venting of the cavity found under the screw head. 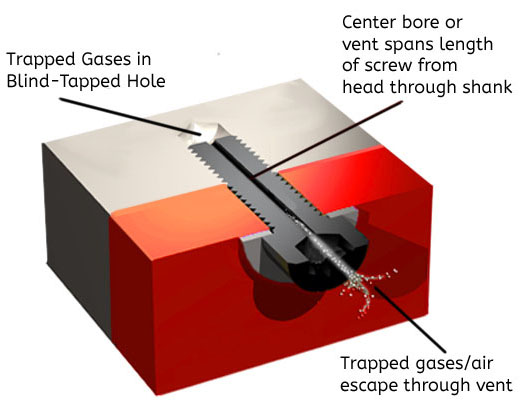 What is a vented washer?
When a screw is tightened over a flat washer, or directly an application without a washer, volumes of gas can be trapped in the space and beneath the fastener head along the screw shaft. Vented washers feature two bored canals on opposite sides of the flat face which provide an escape route for trapped gases.

What is a virtual leak?
A virtual leak is comprised of gases that are trapped physically within a pocket with only a miniscule escape path from the trapped pocket of gas into the chamber proper.

A-286 / Alloy 660 Heat Treatments:  There are several heat treatment combinations for A-286 (Alloy 660) all with slight variations in performance. They can be specified via an AMS number or Class: A, B, C or D,  with most common specified as class A or D.   The grades A, B and C all have the same minimum tensile strength and minimum yield strength of 130ksi and 85ksi respectively. However grade D has a significantly better yield with a min tensile of 130ksi and a min yield of 105ksi. By AMS numbers, the most common for A286 / Alloy 660 is AMS 5737 (same as Grade A) and then AMS 5732 (same as Grade B).

A286 / Alloy 660 Cold Worked: For additional strength, A286 could be aged and cold worked to achieve a min ultimate tensile strength of 160ksi upon request